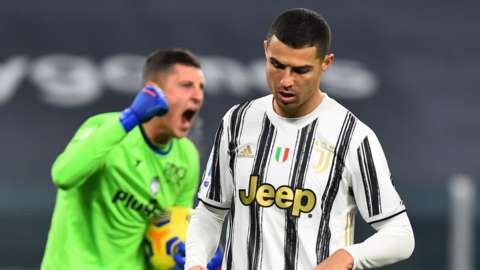 Five-time Ballon d’Or winner, Cristiano Ronaldo's penalty streak ended and he failed to win it for Juventus by missing a penalty as the defending champions played out a 1-1 draw against Atalanta at the Allianz Stadium on Wednesday night.

Federico Chiesa scored the opening goal in the 29th minute with a lovely strike from outside the box. Remo Freuler equally matched that with another beautiful strike in the 57th minute to level matters. On the hour mark, Chiesa was brought down in the box by Hans Hateboer, and Ronaldo stepped up to take the spot-kick, but Atalanta goalkeeper, Pierluigi Gollini saved the weak penalty from the Portuguese.

Ronaldo has scored 7 consecutive penalties for the Old Lady this season. Gollini is the first goalkeeper to stop the Portuguese from scoring a penalty, and his first miss has cost Juventus all 3 points.

Juventus moved up to third on the log with that draw but missed the chance to close in on AC Milan, who also finished with a draw away to Genoa. Atalanta, on the other hand, moved up to eight on the long.

Do you think Juventus will sack Pirlo?