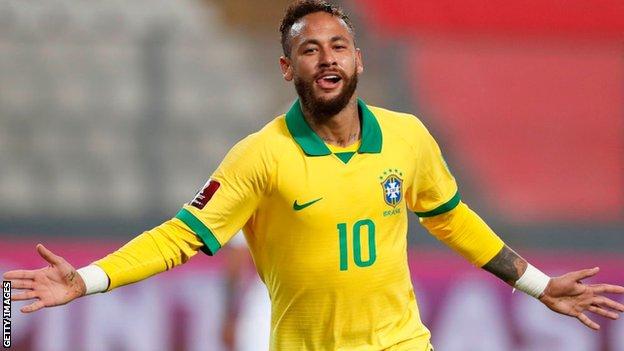 Most expensive footballer of all time, Neymar Junior scored a hat trick as Brazil beat Peru 4-2 away from home to remain top of the CONMEBOL table, and in doing so, he has surpassed legendary Ronaldo Lima on the list of all-time scorers for the Selecao.

Peru took the lead early in the game after 5 minutes, Neymar levelled matters in the 28th minute from the spot-kick. Renato Tapia scored the second for the home side just before the hour mark, Richarlison equalized for the Brazilians 5 minutes later. Neymar scored his second and Brazil’s 3rd goal from the penalty in the 83rd minute. The PSG star wrapped up the scoring in added time.

The 28-year-old forward is now the second all-time highest goal scorer for the brazil national team with 64 goals in 103 games, surpassing the great Ronaldo, who scored 62 goals in 98 games for the 5-time world champions.

Neymar’s next target will be to become the all-time highest goal scorer for Brazil, as he is 13 goals behind legendary Pele, who scored 77 goals in 92 matches for the Selecao.

Do you think Neymar will beat Pele’s record?