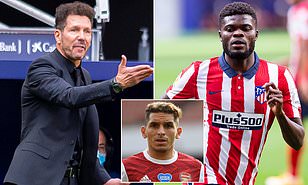 Spanish La Liga side Atletico madrid and their manager Diego Simeone are furious with Premier League side Arsenal, at the signing with which the Gunners signed midfielder Thomas Partey.

Arsenal sigbed the Black Stars of Ghana midfielder few minutes to deadline after paying for his release clasuse, but Atleti are furious because the Gunners did not tell them they’d sign Partey.

Partey was a major part of Simeone's plans with Atletico madrid, but the club were powerless to keep hold of him after Arsenal swooped in with a £45million deal in the final minutes of deadline day.

Do you think Partey will do well at Arsenal?