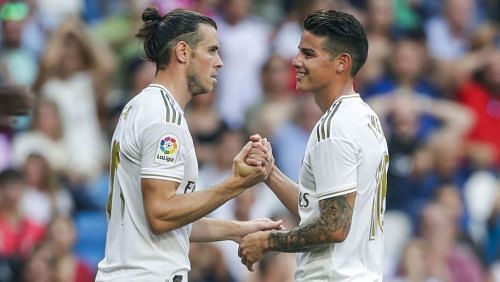 Real Madrid star set to reunite with Ancelotti at Everton

Real Madrid midfielder James Rodriguez is set to reunite with his former manager Carlo Ancelotti at the Goodison Park, as Everton are expected to complete the signing of the Colombian.

Ancelotti signed James for Real Madrid after the midfielder impressed at the 2014 FIFA World Cup for Columbia. The 29-year-old also played under the Everton manager at Bayern Munich, when he played for the Bundesliga champions on loan. He is now set to reunite with the Italian gaffer, by agreeing to a 3-year deal with the Premier League club.

James Rodrigues played a total of 125 matches for Real Madrid, scoring 37 goals and provided 42 assists for the Los Merengues. A deal worth £21million is set to be finalized by Everton in the next few hours.

The signing of James Rodriguez will come as a piece of bad news for Naija Super Eagles star Alex Iwobi, who joined Everton from Arsenal in the summer of 2019 for £34million plus add-ons.

Do you think Iwobi will get playing time with Everton?