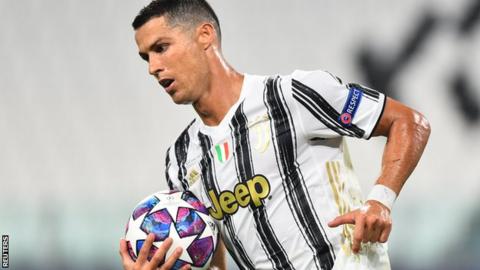 Italian Serie A Champions Juventus were eliminated from the UEFA Champions League due to the away goal rule despite winning 2-1, but five-time Ballon d’Or winner Cristiano Ronaldo still did enough to break and set a new record for the Old Lady.

Lyon took the lead early in the game from a controversial penalty, Memphis Depay stepped up to score the spot-kick in the 12th minute. Ronaldo levelled matters following another controversial penalty in the 43rd minute. The Portuguese then scored the winner with a long-range shot from his weaker foot on the hour mark.

The goal was not enough to send Juventus into the quarterfinals, as they lost 1-0 to Lyon in the first leg, and on away goals rules, the Italian champions were eliminated, but Ronaldo still got into the record books.

Ronaldo scored his 36th and 37th goal for Juventus this season, a mark set in Turin more than 86 years ago by club legend Felice Borel, who scored 36 goals in the 1933/1934 season, to become the player with the highest goals in a single season for the Old Lady.

Do you think Ronaldo will beat Pele’s goals?