Jose Mourinho will be leading his Spur team to the Old Trafford as Manchester United will be welcoming Tottenham Hotspur to the Theatre of Dreams on Super Sunday.

In 56 Premier League meetings between these two teams, Manchester United have won 35 games, while Tottenham have won only 9 matches, with 12 games ending in a draw. Both teams have won 2 each of their last 5 clashes.

Harry Maguire and Bruno Fernandes will be assessed for this clash due to slight knocks. Son Heung-Min is in a race to be fit to play. Gareth Bale resumed training in midweek but he is expected to miss out. Carlos Vinicius is on the verge of joining Tottenham from Benfica but it remains to be seen whether a deal will be completed in time for him to feature on Sunday.

Both teams have not had a bright start, losing on opening day. They both won their Carabao cup games in midweek, but Spur still played the Europa League qualifiers on Thursday. Jose Mourinho is out to hunt his former club and it will be a great clash.

You can catch the game live on DSTV channel 203, SuperSport Premier League on Sunday October 4 2020, by 4:30pm Naija time.

Barcelona are enjoying life under new manager Ronald Koeman following two wins in their first two matches, scoring 7 goals, but they will face their biggest test so far, as they will welcome Europa League champions, Sevilla, to the Camp Nou on Sunday.

In the last 43 meetings between these two teams, Barcelona have won 29 games, while Sevilla have won 7 matches, with the other 8 games ending in a draw. The Catalan giants won 3 of their last 5 ties with the visitors winning just 1.

Barcelona will be without first-choice goalkeeper Marc-Andre ter Stegen and defender Samuel Umtiti due to injury. Clement Lenglet will also miss after picking up 2 yellow cards in their last match. Sevilla, on the other hand, will be without Pablo Pérez due to injury, while Carlos Fernández is a doubt.

This is a big clash between two teams who like to attack and score goals, but Sevilla conceded 14 goals in their last 3 trips to the Camp Nou, and with Barcelona scoring goals freely, it will be difficult to see anything but a win for the Catalan giants.

Defending Serie A champions Juventus have had a slow start and will be welcoming Victor Osimhen and his free-scoring Napoli teammates to the Allianz Stadium on Sunday.

In the last 37 matches between these two teams, Juventus have won 18 games, while Napoli have won 14 matches, with 5 games ending in a draw. The Gli Azzurri are unbeaten in their last 2 clashes against the Old Lady.

Juventus will be without Adrien Rabiot, who got sent off against Roma. Alex Sandro and Federico Bernardeschi are major doubts, while Matthijs de Ligt is still out due to injury. Napoli, on the other hand, will only miss their captain Lorenzo Insigne due to injury.

Naija Super Eagle striker Victor Osimhen is yet to score an official goal for Napoli and will want to hit his mark against Cristiano Ronaldo and his Juventus team. This is a clash between two relatively inexperienced managers in Andrea Pirlo and Gennaro Gattuso, but the Turin giants are expected to edge it.

Premier League champions Liverpool and FA Cup champions Arsenal will battles themselves again at the Anfield Stadium for the second time in 3 days, as both teams will face off tonight in the Carabao Cup (League Cup).

There have been over 200 meetings between these two teams in all competitions, but they have met only 15 meetings in the league cup, Liverpool have won 6 matches, while Arsenal have won 5, with 4 games ending in a draw. Arteta won his first two matches against the Reds, but Klopp’s boys won their last clash on Monday night.

Both teams are expected to make a few changes to the team they played on Monday night, but the Liverpool captain Jordan Henderson and new signing Thiago Alcantara are expected to miss due to injury. Arsenal have no new injury concerns.

This will be another close call, but Arsenal may win this one because their younger players have more experience than the Liverpool young boys, but the Reds have a healthy record at Anfield, and that could ginger them to beat the Gunners.

Who do you think will win between Liverpool and Arsenal? 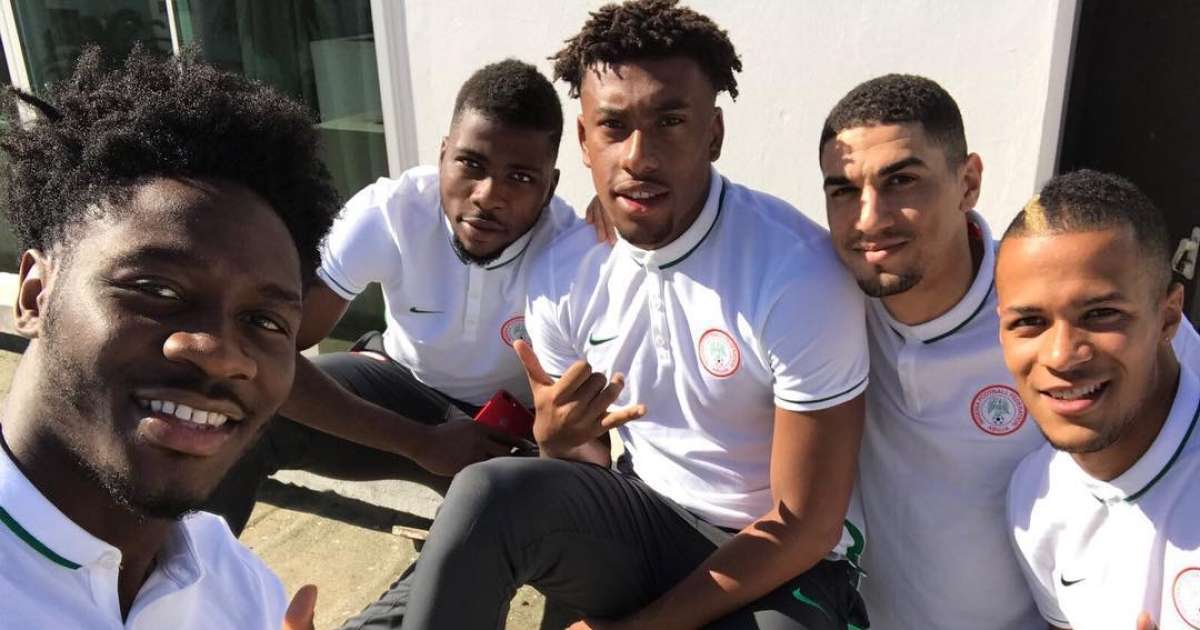 Troost-Ekong has completed a move to Championship side Watford from Udinese, after spending two seasons with the Serie A club side. The 27-year-old defender, who played 66 matches with the Bianconeri, signed a 5-year deal with the Hornets, and he will join his compatriot Isaac Success.

Aina, on the other hand, completed a loan move to newly-promoted Premier League side Fulham, from Serie A side Torino. The 23-year-old defender featured 37 times for the Italian team last season, after enjoying a loan spell at the club the previous campaign.

Do you think the 2 Naija Super Eagles stars will succeed in England?

Defending champions Liverpool proved to be the better side, as they came from a goal down to defeat Arsenal at the Anfield Stadium on Monday night, to continue their 100% start to the season.

Alexandre Lacazette scored the opener in the 25th minute, after a defensive blunder from Andrew Robertson. Sadio Mane tapped in an equalizer 3 minutes late, from a Mo Salah shot. Robertson then scored Liverpool’s second goal in the 34th minute. Debutant Diogo Jota sealed the win for the host in the 88th minute.

Liverpool extend their home unbeaten run to 61, and are now only the third team with a 100% start, along with Leicester City and Merseyside neighbour Everton. Arsenal, on the other hand, are 5th on the log after losing their first league match of the season.

Do you think Liverpool will retain the EPL title? 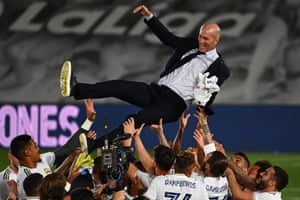 Real Madrid manager Zinedine Zidane has hit another milestone with the Los Blancos, after leading the team to a 3-2 win over Real Betis at the weekend to become a centurion.

Zidane has now won 100 La Liga matches in 147 games, and he now has second-most league victories in Real Madrid's history, behind Miguel Munoz, who won 257 in the Spanish La Liga.

Zizou is in his second stint as Real Madrid manager, and he is already the second most successful manager in the club’s history, winning all the finals he has played. As a manager at the Estadio Santiago Bernabeu, Zidane has won 3 Champions League, 2 La Liga, 2 UEFA Super Cup, 2 Spanish Super Cup, and 2 FIFA Club World Cup.

Will Zidane win trophies for Real Madrid this season?

Lionel Messi looks to have put all the transfer saga behind as he led Barcelona to a comfortable 4-0 win over Samuel Chukwueze’s Villarreal at the Camp Nou in their first La Liga game of the season on Sunday night.

Teenage sensation, Ansu Fati scored the opening goal in the 15th minutes. The 17-year-old made it two with another beautiful finish 4 minutes later. Messi scored the 3rd goal from the penalty spot in the 35th minute after Fati was brought down. An own goal by Pau Torres just before the break wrapped the goals for the Catalan giants.

Barcelona manager Ronald Koeman has the best start he could ever wish for after the thumping of Villarreal, who have 4 points in their opening 3 matches. The Catalonians are 1 point behind rivals Real Madrid, who have played a game more.

Do you think Ronald Koeman will do well with Barcelona?

Five-time Ballon d’Or winner Cristiano Ronaldo, leaped high to score a beautiful header, to help Juventus secure a point, after going one man down and a goal down against Roma at the Stadio Olimpico on Sunday night.

Jordan Veretout scored the opening goal on the 31st minute from a penalty. Ronaldo levelled matters in the 44th minute from the spot-kick. Veretout made it two with his brace just before the break. Juventus were reduced to 10 after Adrien Rabiot got his marching orders in the 62nd minute. The Portugal captain then jumped highest to head home an equalizer for the Old Lady in the 69th minute.

Juventus now have 4 points in their first 3 Serie A games, as the hunt for their 10 straight Scudetto, while Roma have 1 point in 2 matches after they were awarded a loss in their opening match, following the wrong registration of their player.

Do you think Juventus will win the league? 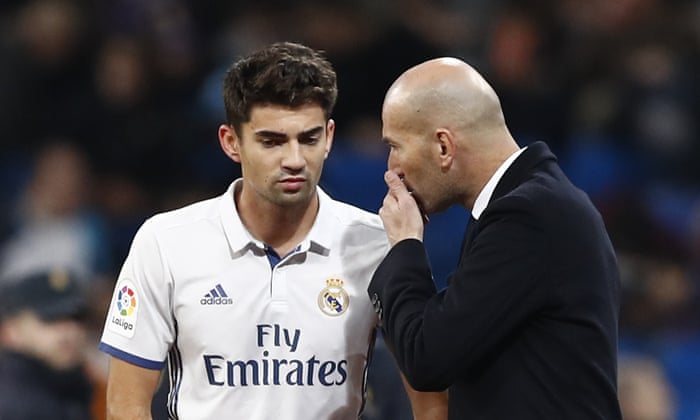 Real Madrid academy product Enzo Zidane, who is the son of Los Blancos manager Zinedine Zidane, is set to join African giants Wydad Casablanca, according to reports from his agent and father’s former teammate Roberto Carlos.

The 25-year-old midfielder is hoping to join Botola Pro 1 side Wydad Casablanca as he is poised to continue his development with the Stade Mohammed V outfit, after an unsuccessful spell with Almeria.

Carlos said on his twitter handle: “I hope to close the deal for Enzo Zidane, a very good player, with Wydad, a great club from Casablanca.”

Enzo was part of the Real Madrid team that won the 2016-2017 UEFA Champions League team. Since leaving the Los Blancos in 2017, he has played for Alavés, Lausanne-Sport, Rayo Majadahonda, Aves, and Almería. Now, his next adventure is with Moroccan side Wydad Casablanca.

Do you think Enzo will do well at Wydad?